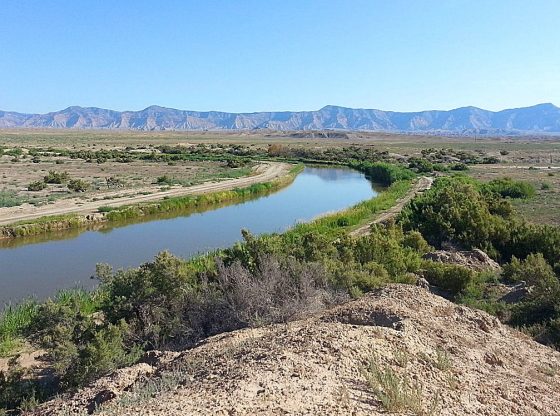 …a program which has been giving property owners large cash sums if they will agree to ‘fallow’ their croplands, thus ‘banking’ (not using) the water to which they have rights, for a given period of time. The term ‘banking’ is misleading, because the water is not stored but simply continues to run downstream in the Colorado River to Utah (Lake Powell), Arizona and eventually, California.

Holly Cremeens is one of several property owners comprising the Grand Valley Water Users Association (GVWUA), and is concerned that the ‘banking’ program, or Conserved Consumptive Use Pilot Project (CCUPP), is a backdoor mechanism to transfer water and existing water rights away from Grand Valley property owners to special interest groups inside and outside of Colorado. The CCUPP is explained in a 2017 report published by Colorado Mesa University (CMU). According to the report, 10 landowners are chosen through a lottery system to participate in the CCUPP, involving a total of 1,250 acres, with $1 million allocated for payments to landowners, and for administrative and infrastructure costs. The graphic below shows the properties currently involved in the 2017-18 ‘fallowing’ cycle.

The Headwaters Group, a wing of the Sierra Club, published a glowing article about the plan in its Fall 2017 newsletter. It also exposed the involvement of another environmental special interest group, The Nature Conservancy:

Under the program, 10 members of the Grand Valley Water Users Association (GVWUA), which operates the historic Government Highline Canal, have taken 1,250 acres of land out of production this year, receiving $560 per acre to help make up for the alfalfa, corn or wheat they would otherwise have grown. Funding comes from the System Conservation Pilot Program and from the Colorado River Water Bank Work Group, a coalition that has been studying water banking since 2009 and includes the Colorado River District, the Southwestern Water Conservation District, The Nature Conservancy, Tri-State Generation and Transmission.

The author of the Headwaters article, Nelson Harvey, admits that participating farmers are subject to ‘inspections,’ but then claims the banking program protects private water rights.

Participating farmers must submit to periodic inspections and keep their fallowed land free of irrigated crops and weeds alike. To protect the GVWUA’s water rights, the water they would have used is diverted as usual from the Colorado River just northeast of Palisade and run through the Grand Valley Power Plant to generate hydropower, then returned to the river.

The water, however, is being allotted to third parties; power companies, interests in other states, through contracts facilitated by cash payments. The landowners enjoy a temporary enrichment of $560 per acre, but may lose control of their water by failing to put it to the beneficial use required to maintain rights to their previous levels of consumptive use. The article continues:

In 2017, the pilot project returned an estimated 3,200 acre-feet of water to the Colorado River that would otherwise have been consumed by crops, according to GVWUA general manager Mark Harris. It’s a drop in the bucket compared to the 7.5 million acre-feet that Colorado and its neighbors in the Upper Colorado River Basin are required to ensure reaches the lower basin in an average year under the 1922 Colorado River Compact. Yet the program is an important first step in testing the theory that farms and cities could partner to replenish water levels in Lake Powell, the 254-square-mile reservoir that effectively serves as a bank account where upper basin states deposit the water that is later released to the lower basin.

The goal of the current phase of the CCUPP is to bank 3,200 acre feet of water during the arid Grand Valley’s typical 6 month irrigating season. But the CMU report and Headwaters article raises questions about where the benefits of the program are being realized. The following graphic illustrates the impact on water levels in Lake Powell, a vast recreational destination in southern Utah.

A newsletter issued by the Colorado River District (CRD) from April of 2017, indicated funding for the CCUPP may total over $2 million over two years, and named Mark Harris, a landowner and General Manager of the GVWUA as the key advocate for the program.

The Articles of Incorporation for the GVWUA, which obtains irrigation water primarily from the HighLine Canal, appear to prohibit the water trading activities Harris is advocating and other association members are taking part in. Holly Cremeens posted a commentary on her website, fullcanal.com, citing conflicts between the ‘banking’ program and the legal obligation to use water for irrigation to which GVWUA members are bound. Cremeens’ commentary reads:

[some sections removed for brevity]

The Grand Valley Board of Directors, management and legal counsel are illegally using the shareholders water rights. The fallowing project, Water Banking/Conserved Consumptive Use Pilot Project (CCUPP) is illegal according to the Articles of Incorporation of the Grand Valley Water Users Association (GVWUA), Colorado Water Law and Colorado Non Profit Law.

The shares are appurtant (tied to) the land.

Article IV section 6. The ownership of each share of stock of this Association shall carry, as incident hereto, a right to have water delivered to the owner thereof by the Association for the irrigation of the lands to which such share is appurtenant.

The shareholders right to water is for irrigation of the lands as described are perpetually and inseparably appurtenant to the land.

Article V Section 8. By subscribing to the shares of this Association each signer agrees that the right to any water theretofore appropriated by him, or by his predecessor in interest, for the irrigation of the lands described in said subscription, or customarily used thereon, shall become appurtenant to such lands. There shall be further incident to the ownership of such shares the right to have such water delivered to the owner thereof by the Association for the irrigation of said lands, as the Association shall from time to time acquire or control means for that purpose:

The water cannot be transferred without transferring the title to the land.

Article V Section 10.  Every transfer of the title to any lands to which the said rights and shares are appurtenant, whether by grant or by operation of law (except for the land may be subjected by grant, or involuntary under any law, to an easement, the exercise of which does not interfere with the cultivation of the soil by the servient owner) shall operate, whether it be so expressed therein or not, as a transfer to the grantee or successor in title, of all rights to the use of water for the irrigation of said lands, also all rights arising from, or incident to, the ownership of such shares, as well as the shares themselves; and upon presentation to this Association of proof of any such transfer of land, the proper officer shall transfer  such share  of stock up on its books to the successor in  title to said lands.

Not all members of the GVWUA are on board with the ‘banking’ plan. According to Cremeens’ commentary:

At the beginning of this project, the GVWUA and management, with permission of the [Board of Directors] BOD, made the decision to move forward with investigating and potentially creating a [CCUPP] pilot project. However, individual board members remain skeptical and agricultural water users served by the GVWUA were either only peripherally aware or completely unaware of the idea.

Article VII Section 15 indicates that the involvement of Harris and the 10 members chosen to participate through the CCUPP lottery leaves the entire Board of Directors of GVWUA open to possible legal jeopardy.

VII Section 15. The directors shall have no personal liability to the corporation or to its members or stockholders for monetary damages for breach of fiduciary duty as a director; except that this provision does not eliminate or limit the liability of a director for any breach of the directors duty of loyalty to the association or its members or stockholders; acts or omissions not in good faith or which involve intentional misconduct or a knowing violation of law; or in a transaction from which the director derives an improper personal benefit.

With CCUPP grant money in the millions there may exist a temptation to misapply funding. According to the CRD newsletter, Mark Harris asked for $5,000 from CCUPP funds without explaining how the money would be used. There is also a lack of transparency related to which landowners are participating or how much cash they are receiving from the program.

The following explanatory slide claims that the ‘wider association must see benefit,’ not just those landowners receiving $560 per acre to fallow their land. Since not all members of the GVWUA are on board with participating in the CCUPP, the legitimacy of this pact is in question.

Cremeens is urging other members of the GVWUA to reconsider their enthusiasm about the CCUPP, but with big money in the picture, the potential unintended consequences may go unheeded.

One of the sticky problems with Colorado water law is a lack of clarity in the definition of ‘beneficial use,’ and of who may decide how the Western Slope’s scarce water is best used. In 1969 water laws were altered profoundly by Judge Klein in the state Water Court, and subsequently, ‘augmentation’ or ‘banking’ programs became mandatory in some areas of the state. There are also contradictions in the language of state water law vs the way it is administered. According to state statute, ground water and surface water are connected, but the law is administered in such a way that those who dig wells (ground water) connected to existing surface water rights, are not given the freedom to use those wells as a prior appropriation. A group of Colorado citizens recently wrote a Resolution addressing this fundamental contradiction with the hope that it will be adopted and introduced by one of the state’s rural legislative representatives. (see below)