The anti-pipeline protesters descending by the hundreds on rural North Dakota in support of the Standing Rock Sioux aren’t necessarily standing with Beverly Fischer. Or her dead buffalo.

In one day, the Fischers had three buffalo drop dead after hundreds of protesters on Highway 1806 panicked the herd in a clash with Morton County law enforcement.

“They’re honking their car horns. Then the police are there, and the protesters are yelling and screaming and chanting, and the buffalo are across the ditch in the pasture, and they’re just running because they don’t know what to do,” said Mrs. Fischer.

“They’re just running in big circles throughout the pastures,” she said. “By the end of the day, three were gone.”

The Fischers’ plight echoes those of local ranchers, farmers and others whose struggle to maintain their livelihoods has gone largely unnoticed as protesters upend the rural communities along North Dakota’s southern border.

The Fischers, who live on the Standing Rock Sioux reservation in Selfridge, North Dakota, also illustrate the growing unease within the tribe over the activists who have increasingly shrugged off the chairman’s call for peaceful and prayerful opposition to the project.

“There are a lot of local people being vocal now that don’t want these protesters around,” Mrs. Fischer said.

The North Dakota Stockmen’s Association has offered rewards for information on the rash of livestock depredations during the past two months, including butchered and burned cows and bison, horses and cows shot and killed, and at least 30 missing cattle.

The perpetrators have not been caught, and a number of activists have decried the livestock deaths.

With as many as 2,500 people living in different camps with different philosophies, however, the locals are convinced that some of the more belligerent protesters are responsible.

“These have been cruel and senseless acts against animals and their owners,” association chief brand inspector Stan Misek said in an Oct. 28 statement. “We are committed to finding out who is responsible and bringing forth justice for the victims.”

For ranchers like the Fischers, catching those responsible for harming their livestock is almost impossible. They live about 43 miles from the Cannonball Ranch, where their herd of more than 600 bison graze over a vast expanse of 8,700 leased acres.

“Some days, we would get three phone calls a day: ‘You’d better get up here; your buffalo are being chased,’” said Mrs. Fischer. “They keep riding up from the south of the ranch into the pastures where the buffalo are supposed to be grazing. So our animals are being stressed from being chased.”

Even those activists who mean no harm are causing stress for the bison, not to mention the Fischers.

“You’ve got people trying to walk up to them in the pastures because these people are so peaceful and pacifistic, they think the buffalo aren’t going to charge them,” said Mrs. Fischer. “We’re just damn lucky no one’s been killed yet.”

For whatever reason, the protesters have also made it their mission to help the buffalo escape by cutting the pasture fences.

“They would just walk out there a mile to where the buffalo are, cut fences, let our buffalo out,” said Mr. Fischer. “And then we started seeing within the last month, month and a half, reports of bison getting butchered. We have reports of them catching bison. There’s video of them chasing four of them and butchering them.”

In the spring, the Fischers had 635 buffalo, but there’s no telling how many will be left once the roundup begins. Already a herd of 30 bison, mainly calves and older animals, is missing.

“That herd is in the wind. We don’t know where it went,” said Mrs. Fischer.

There’s also evidence that the protesters are moving from the pastures on the east side of Highway 1806 to the west side, leaving cut fences and campsites in their wake.

“We found tents where the buffalo were supposed to be, where these people were camping, cut fences, trash, debris, and no sign of the buffalo,” Mrs. Fischer said.

The Fischers, both 52, say they’ve found themselves in tense situations with the mostly younger protesters.

“One day I was fixing the fence, and I looked behind me, and they’re cutting the fence just as fast as I’m fixing it along the highway,” Mr. Fischer said. “I said, ‘Hey guys, what’s the deal,’ and pretty soon there’s 75 people on the other side of the fence, and they’re yelling at you, that you’re a greedy oil person, you stole their land, and everyone’s screaming at you.”

He said he has been forced to call the Morton County Sheriff’s Department on occasion in order to enter the pasture.

“You’ve got 500, 600 people out there. We want to go in the pasture gate, and they just line it four, five thick across the whole pasture,” he said. “The minute they see the cops, then they’ll move. They’re doing all this protesting, but 20 of them will be sitting there praying and 500 of them will be raising hell.”

Their business has taken a significant hit. Last year, the Fischers had the most successful buffalo sale in the nation, but neither of them expects to repeat that success in light of the protests.

“Economically, we’ve taken a massive blow,” said Mrs. Fischer. “I feel that we’re not going to get the buyers. There’s probably no way they can get to the ranch with all the state roadblocks. And the calves are lighter this year.”

She anticipates that most of the bison cows that had been bred will have lost their calves.

“With all this stress going on, I wouldn’t be surprised to see easily 75 percent of them are going to be open,” said Mrs. Fischer. “Because when a buffalo cow gets stressed, she will absorb her calves. You know what that means? That means no calf crop for me next year. They’re open. They’re no longer bred. That’s a horrible thing.”

The Obama administration announced Monday that it would delay a decision on whether to release the final permit for the pipeline, which has been completed in North Dakota except for 1,100 feet at Lake Oahe.

That means more weeks or months of uncertainty for the Fischers and other locals waiting for the situation to play out.

“However this is resolved, I’m still here,” said Mrs. Fischer. “I’m Standing Rock. I make my home here on the reservation. And I have to live with the fallout of all the dirty deeds these people have done.” 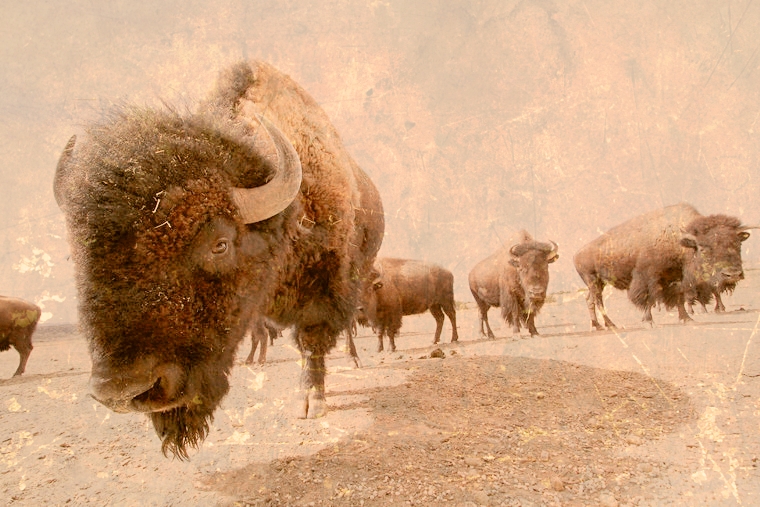