Because it’s not happening in New York or D.C. or Los Angeles, it doesn’t really count as news. When a few snowflakes begin to fall in Washington, it’s a national emergency. When Los Angeles has a lot of traffic on Thanksgiving, it requires an international APB. But when tens of thousands of acres are burning in the South following months of drought, it barely warrants a shrug.

Ravaged by months of drought, huge swaths of the southeast United States are on fire, but you wouldn’t know it judging by national media coverage.

A total of six states in the southeast (Tennessee, North Carolina, South Carolina, Georgia, Alabama, and Mississippi) are currently suffering from “exceptional drought,” a category reserved for the most severe drought conditions, according to the National Drought Mitigation Center. The majority of land in four states (Tennessee, Mississippi, Alabama, and Georgia) are facing “extreme drought,” the second most severe level.

According to the National Interagency Fire Center (NIFC), a federal agency tasked with coordinating interstate fire prevention and suppression efforts, 83 fires are currently raging across 6 southeastern states. Eighteen of those are classified by NIFC as large and uncontained.

If you get most of your news from national TV networks, this is probably the first you’ve heard of any of this. The conversation at Thanksgiving dinner tables in the South last week wasn’t about politics; it was about drought and burn bans and fire risk. Instead of studying up on how to talk to their uncles about Donald Trump, people were asking where they could find hay for their livestock and how the lack of water was slowly killing their farmland.

The Rock Mountain fire in Georgia, which is only 45 percent contained and not expected to be fully under control until mid-December, now encompasses more than 23,000 acres.

In total, nearly 170,000 acres in the South are currently on fire. A total of 1.4 million acres throughout the region have burned so far this year according to NIFC data. Nearly 3,800 personnel in the region are currently working to put out the fires.

Extreme drought conditions over several months set the stage for the wildfire epidemic in a region that is used to receiving several inches of rain each month. Oneonta, a small town in north-central Alabama, went 89 days without rain. Tuscaloosa went 61 days without any measurable rain. Chattanooga, which is 20 inches below its annual average (and eight inches below its average over the last two months) set a record for its driest season ever. Atlanta went 42 days without seeing any rain.

The lack of rainfall has led directly to the scores of fires currently burning throughout the South.

The scene in Gatlinburg is nothing short of terrifying:

What’s happening in #Gatlinburg is unreal!!!pic.twitter.com/slKZvsX4Xe

The same goes for Dollywood: 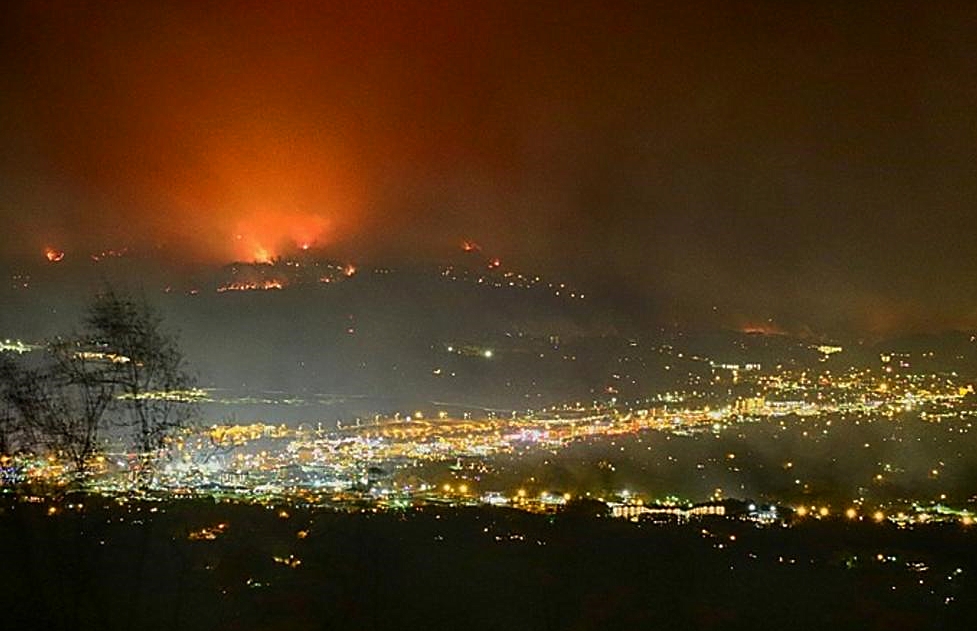 But because it’s not happening in New York or D.C. or Los Angeles, it doesn’t really count as news. When a few snowflakes begin to fall in Washington, it’s a national emergency. When Los Angeles has a lot of traffic on Thanksgiving, it requires an international APB. But when tens of thousands of acres are burning in the South following months of drought, it barely warrants a shrug. The national media attention is important because it brings with it material support both for prevention/suppression efforts and for recovery work. For those who wish to help, the American Red Cross has set up a number of ways for individuals to help those in need:

The American Red Cross among others have created ways for people to donate and help those affected in wildfires that have destroyed homes, hotels and forced thousands of evacuations in Gatlinburg and the Great Smokey Mountains National Park this week.

Ways to aid in disaster relief can be found by visiting redcross.org/donate.

To donate by check or to this specific cause, complete this donation form by printing and mailing to the American Red Cross, PO Box 37839, Boone, IA 50037-0839.

To volunteer, particularly after the evacuation and during the wildfire recovery, visit redcross.org/volunteers,

In the meantime, prayers for rain and for the safety of firefighters currently trying to contain the wildfires wouldn’t hurt one bit.