Each of these organizations are connected to UN NGOs such as the Nature Conservancy , Wilderness Society, and Wildlife Conservation Society. Don’t be fooled by the new UN addition in red, a disclaimer that unless the organization is in consultative status it does not connote affiliation with the UN. That is flat out not true. And like children playing in a sandbox, these groups all play with each other, are interconnected, and overwhelm us with their agenda.

For Idaho, not only is there the Columbia River Treaty re-negotiations that will take control of all water resources, there is also another major land take over.

There are a multitude of Idaho non-profits and United Nations (UN) non-governmental organizations (NGO) that are aggressively pursuing connectivity projects.  Essentially the goal is to connect large swaths of land in Idaho’s east corner which neighbors Montana and Wyoming.  They would love to see this land all locked up into one major landscape of wilderness, for wildlife only.

The  High Divide (HD), Crown of the Continent (COC), Yellowstone to Yukon (Y2Y), Greater Yellowstone (GY), and the land trust partnership group Heart of the Rockies Initiative (HOR), are just a few of the organizations that are destructively working to create wildlife corridors in the Island Park area.

Each of these organizations are connected to UN NGOs such as the Nature Conservancy (NC), Wilderness Society (WS), and Wildlife Conservation Society (WCS).  Don’t be fooled by the new UN addition in red, a disclaimer that unless the organization is in consultative status it does not connote affiliation with the UN.  That is flat out not true.  And like children playing in a sandbox these groups all play with each other, are interconnected, and overwhelm us with their agenda.

Anyway, here is the map that shows how much land they are after with the Salmon Selway not even included in this discussion.  This map is proudly displayed on the WCS website, a trophy of the successful tromping of Idaho. 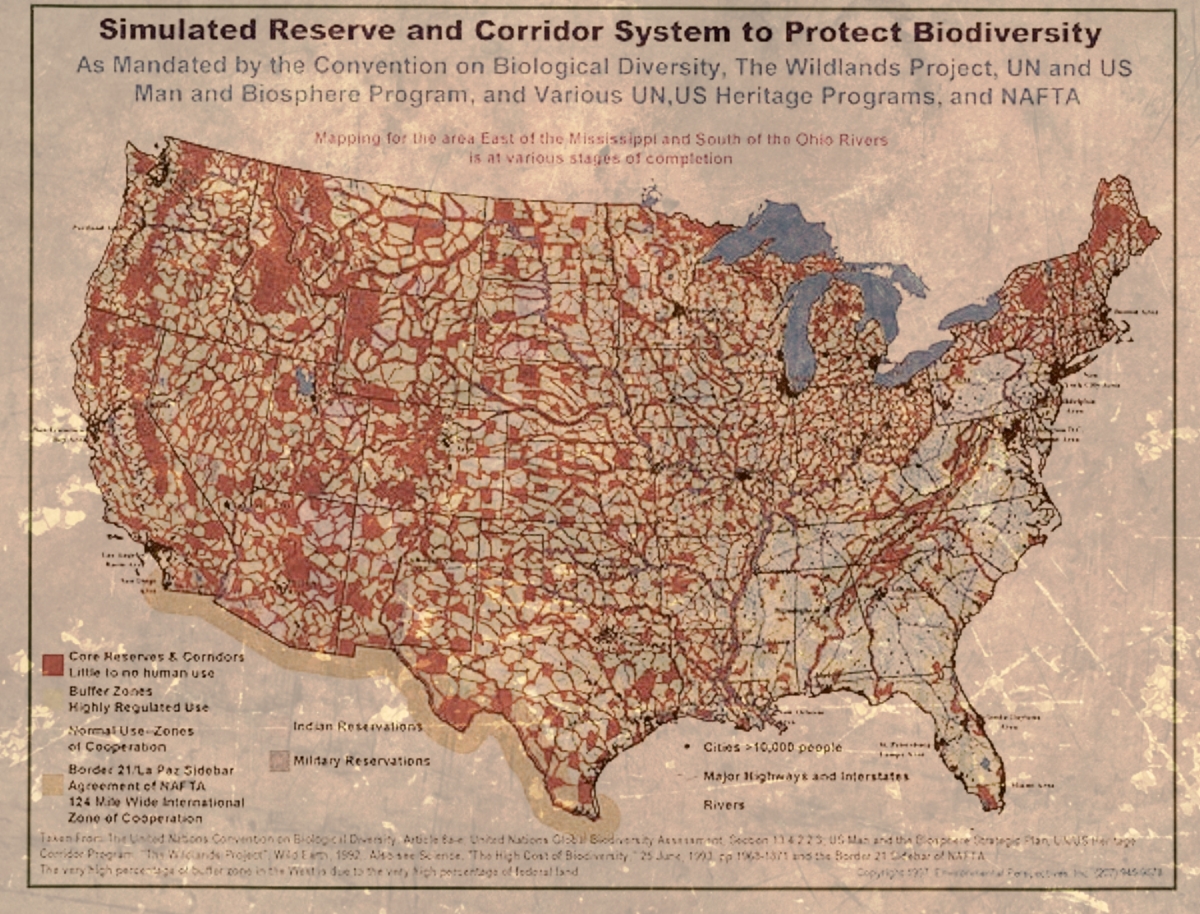 Quite a bit of money contributes to this takeover.  Just the Greater Yellowstone alone has over 10 million dollars in their coffers.  Where do they get all that money?  Part of it is your tax dollar.

Now your tax dollar goes to this in other ways as well.  The Federal Highway Administration (FHA) believes in creating wildlife corridors which eventually contribute to connectivity and have spent your money to study it and figure out how many wildlife are affected by collisions.  Forget how it has impacted humans.  You are even paying your governor to participate in this through the Western Governors’ Association (WGA).

But don’t forget the Idaho Transportation Department (ITD), your state taxes are used for this nonsense as well.  Four years ago Idaho Fish & Game honored an ITD Senior Environmental Planner for his success in collectively garnering over 718,000 dollars to study (affectionately known as the Cramer study) where wolverines and bears migrate, and a study to prioritize wildlife collision areas.  Here is the 2016 report and on page 6 you can see all the recommended overpasses, underpasses, fencing, traffic calming, and driver warning systems for Highway 20 in Island Park.  What is truly remarkable about this is while our Idaho roads and bridges crumble there is plenty of money to spend on figuring out where cars collide with wildlife and put money into building a road for them.  And here is the Highway 20 priority map for those animals.  Now it makes sense why Idaho registration fees went up and why the current legislature has a huge task in front of them to fund transportation.  Those bunnies need a safe passageway.

Now there are many working tirelessly on this so surely it must all be coordinated together.  Who else but the Great Northern Landscape Conservation Cooperative (GNLCC) to the rescue for connectivity.  Established by the Department of Interior (DOI), it is an “international” network to advance collaborative landscape conservation.  Here is the amount of land the GNLCC wants to take and a link to the data they have been collecting.  Remember, this is the federal government doing it, not some obscure group.  There are a multitude of participants, including multiple UN affiliates, making decisions about Idaho.

In a nutshell, the DOI created an organization that promotes these UN affiliated lunatics taking more land away from Idahoans.  Originating in 2009 with order 3289, and advancing it with order 3330, then announcing the truth to “develop opportunities to further establish partnerships that benefit Tribes and Federal agencies” in order 3342.

The National Park Service (NPS) and US Fish & Wildlife Service (FWS) were granted the privilege of administering the GNLCC in 2010.  The implementation plan includes partnerships with land protection NGOs and land trusts, Canada, IUCN, USFS, and the BLM while using the Endangered Species Act to justify its means.  Of course they are using your tax dollar to stick it to you, not only in this way but in grants as well, up to one million.

But the truth is, it is just the UN agenda.  As a partner to the DOI, the International Union for the Conservation of Nature (IUCN) has been promoting connectivity for a very long time.  As well, the FWS has its own comradely with the UN for migratory species protection.  According to Agenda 2030, Goal 15.5, we are assigned the task to “Take urgent and significant action to reduce the degradation of natural habitats…”.  Roadkill should certainly be a focus to ensure a natural habitat is protected in a way that it does not cause harm to the animal.  As this Agenda 2030 document explains in #33, “We are therefore determined to conserve and…protect biodiversity, ecosystems and wildlife.”  Look forward to paying for animal roads.

The federal and state governments, as usual, are taking our money and using it against us, turning it over to UN groups for them to implement UN objectives.  Can President Trump undo all of this?  Or will it take the masses to finally stand up and say no more.  How can the tiny community of Island Park fight this off?  What are our legislators doing to stop this?  Idahoans just continue to see our state being eaten up by government with its UN partnerships.