Ten years ago, this Idaho rancher stood up to the feds, and won

Home /BLM, latest_news/Ten years ago, this Idaho rancher stood up to the feds, and won 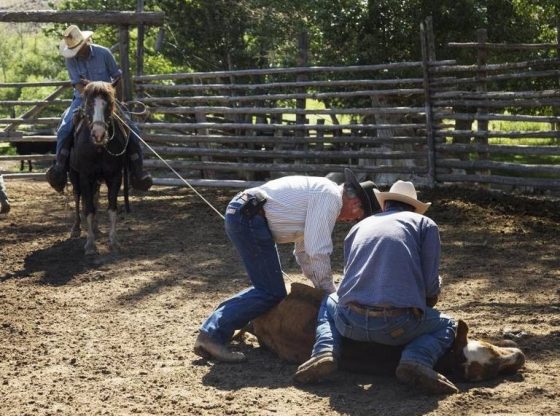 Water-rights victory made this Idaho ranch owner a ‘rock star’

Improved equipment, nutrition and data-driven ranch management have changed the cow-and-calf game since Matthew Joyce established the Joyce Ranch near Murphy 152 years ago.

But winter is still cold and dust is still dry, and Paul Nettleton, the ranch’s 67-year-old, fourth-generation owner, still throws ornery calves to the ground the way his great-grandfather did.

When his ranch hand roped only one calf leg on a 92-degree day in June, Nettleton pulled the bellowing calf’s tail one way and leaned his shoulder into its rear hip until it toppled. Nettleton, his 37-year-old son and partner, Chad Nettleton, and another hand gave the calf a shot and checked it for pink eye. Once the job was done, the team repeated the steps with another calf.

“I remember the old ways, the way we used to do things,” Nettleton says. “[Chad] has a more modern look at things. I’m not sure it’s any better.”

The Owyhee Cattlemen’s Association, the oldest such group in the state, says the Joyce Livestock Co. is the oldest family-owned ranch in Idaho.

A GOLD RUSH LURES A HOMESTEADER

The ranch began after the discovery of gold in the Owyhee Mountains during the Civil War.

Matthew Joyce, a native of Ireland, moved from Nevada and established a homestead on Sinker Creek, a Snake River tributary south of Murphy, to farm and sell food to gold miners. The creek basin is a narrow stip of green bounded by steep gulch walls with sagebrush desert above.

Sinker Creek was unsurveyed in 1865, which meant Joyce could not establish a formal homestead to own the land, Nettleton says. Squatter’s rights dictated who owned what, and a man named Scotch Bob Davidson was already at Sinker Creek when Joyce arrived.

But Davidson traveled, as did Joyce, so the men agreed to be neighbors to ensure that other squatters could not move onto the area while they were away.

The first Joyce house was built close to the creek and ruined by a flood from spring runoff. The second burned down, forcing Joyce into the chicken coop. He added to that coop over the years, and it remains the oldest structure on the ranch.

Joyce had four sons, but none married. His daughter, Maggie Joyce Nettleton, was the only one in her generation to have children and live on the ranch. Nettletons have run the ranch ever since.

In 1943, a dam that had been built on Sinker Creek collapsed, resulting in a 40-foot-high wall of water that leveled much of the ranch. It was rebuilt.

Today, Paul Nettleton owns 5,000 acres in the basin and 7,000 disconnected acres scattered around the area. The family’s cattle also graze on 120,000 acres of federal land stretching around Silver City 20 miles away, where a young Paul Nettleton traveled on horseback for supplies.

This year, the herd suffered during the long, snowy winter, leading weak cows to give birth to weak calves. The Nettletons rounded up newborns and brought them to the ranch to recuperate. Still, about 200 died.

The losses will hurt 2017 sales come auction time. The Nettletons do not disclose revenues.

In 2007, Joyce Livestock Co. and another Owyhee County family ranch, LU Ranching Co., won a lawsuit against the U.S. Bureau of Land Management for access to water on federal grazing land.

Joyce and the government had each filed claims to lands abutting Jordan Creek, an Owyhee River tributary that flows west into Oregon. Joyce’s claim came first, but the government said a subsequent federal law let the government appropriate it.

Water claims are valuable assets for businesses. Securing access allows ranchers to plan how to manage their operations, including the right to divert water, says John Thompson, director of communications at the Idaho Farm Bureau.

Had the government won, rights to use water on other federal lands would have been jeopardized, Thompson says.

“They are patriots,” Thompson says. “They just said, ‘Hell no. We won’t let this happen.’”

But the Idaho Supreme Court denied Paul Nettleton’s request for legal fees. The government presented “a legitimate issue” not previously resolved by courts, not a frivolous case, the court said.

The Farm Bureau held fundraisers and solicited donations from cattle groups around the country for the Nettletons, but those efforts generated little.

“They won a battle in the courtroom for cattlemen all over the West, but they lost in the grand scheme of things,” Thompson says.

Standing up to the federal government will be Paul Nettleton’s legacy, says Garth Taylor, an agricultural economist at the University of Idaho.

“He’s a folk hero, a rock star,” Taylor says. “He will live on in history for that one thing.”

“We have overgrown grasses on the range,” he says. “We have range protected that doesn’t need to be. We have fire dangers like crazy. In the good old days, we’d have this grass grazed down at least enough that fire wouldn’t spread very fast.”