President Trump’s remarks about restoring Utah lands to its citizens 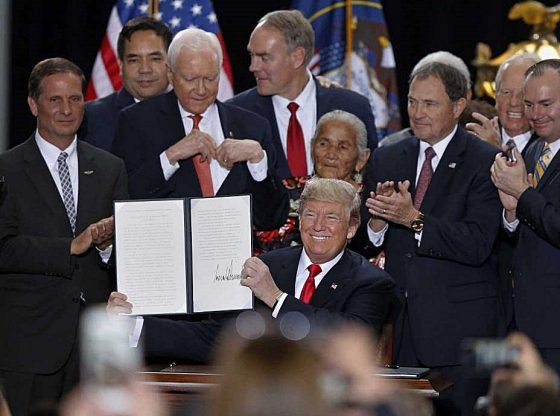 “Your timeless bond with the outdoors should not be replaced with the whims of regulators thousands and thousands of miles away. They don’t know your land, and truly, they don’t care for your land like you do. But from now on, that won’t matter. I’ve come to Utah to take a very historic action to reverse federal overreach and restore the rights of this land to your citizens.”

THE PRESIDENT: Thank you to a very special man, Orrin Hatch, for the introduction. And that was truly a nice introduction and I appreciate it.

You are a true fighter, Orrin. And I have to say, I’ve gotten to know him very well. I’ve gotten to know a lot of people very well. You meet fighters and you meet people that you thought were fighters but they’re not so good at fighting. He’s a fighter. We hope you will continue to serve your state and your country in the Senate for a very long time to come.

We’re now one huge step closer to delivering to the American people the historic tax relief as a giant present for Christmas. Remember I said we’re bringing Christmas back? Christmas is back, bigger and better than ever before. We’re bringing Christmas back. And we say it now with pride. Let me just say, to those here today and all across the country: Merry Christmas to everybody. And also, happy holidays and a great New Year. We’re going to have a great, great year.

Joining us at this ceremony are many other tremendous leaders from Utah, including your great senator, Mike Lee. Where’s Mike? Mike, come! Come here, Mike. Get up here, Mike. He worked along with Orrin and the rest of them. We got it done. Mike, thank you very much.

You want to say something?

SENATOR LEE: It’s not every day the President of the United States asks you to take the microphone from him. But I want to say, Mr. President, thank you for your leadership. Thank you for being here. Thank you for standing with the people of Utah. We appreciate it deeply.

THE PRESIDENT: Thank you, Mike.

And I have to say, really — talk about a very special guy that I made Secretary of the Interior. Does he know the interior. He’s knows it, he loves it. He loves seeing it and riding on it. Ryan Zinke, who truly believes in protecting America — he is protecting America. And nobody loves it more. Ryan. Thank you. Just as he protected America as an officer of the legendary Seal Team Six. He’s a tough cookie and you’ve done a great job. Thank you, Ryan.

Governor Gary Herbert. Where is Gary? Come on Gary. Come on, Gary. Get over there, Gary. So they can — and you’re your wife, the First Lady, is fantastic. Thank you very much. First Lady. Thank you, First Lady.

I’ve just come from touring Welfare Square with Senator Hatch and some amazing people from the leadership of the Church of Jesus Christ of the Latter-day Saints. Special. I spent a lot of time with them. In fact, I went around the store, I wanted a nice can of tuna fish –and they had plenty. They really help people. Incredible.

After our visit, I can truly say firsthand that Utah’s awesome natural beauty is exceeded only by the warmth and grace and hospitality of its citizens. This state has many natural treasures, but its greatest treasure by far is its people. And we will ensure the right of the people to live according to the faith in their hearts, which is why we will always protect your religious liberty. And we’ve been doing that.

I know all of you feel blessed to be living among some of the most glorious natural wonders anywhere in the world. You cherish Utah’s gleaming rivers and sweeping valleys. You take inspiration from its majestic peaks. And when you look upon its many winding canyons and glowing vistas, you marvel at the beauty of God’s great creation.

And that is why I’m here today: Because some people think that the natural resources of Utah should be controlled by a small handful of very distant bureaucrats located in Washington. And guess what? They’re wrong.

Your timeless bond with the outdoors should not be replaced with the whims of regulators thousands and thousands of miles away. They don’t know your land, and truly, they don’t care for your land like you do. But from now on, that won’t matter. I’ve come to Utah to take a very historic action to reverse federal overreach and restore the rights of this land to your citizens. Thank you. Thank you. Thank you.

But before I began — because I understood how big it is — I’m a real estate developer. When they start talking about millions of acres, I say, say it again? That’s a lot. So, before I began, I met with Senator Orrin Hatch, who loves Utah and loves the people of Utah. I called Senator Mike Lee, who loves Utah and loves the people of Utah. I called your governor. I called my original — where is he? There he is. I called all of the friends that I have in Utah. I said, what do you think? I said, will this be good for our country, and will it be good for your state? They said this would be incredible for our country, will be incredible for Utah. Finally, you would be giving people back their access to the land they know, to the land they understand, and most importantly, to the land that they love.

I also said, will it be at all controversial? They all told me no. How did that happen? I don’t think it is controversial, actually. I think it’s so sensible.

Therefore, today, on the recommendation of Secretary Zinke, and with the wise counsel of Senator Hatch, Senator Lee, and the many others, I will sign two presidential proclamations. These actions will modify the national monuments designations of both Bears Ears and Grand Staircase-Escalante.

As many of you know, past administrations have severely abused the purpose, spirit, and intent of a century-old law known as the Antiquities Act. This law requires that only the smallest necessary area be set aside for special protection as national monuments. Unfortunately, previous administrations have ignored the standard and used the law to lock up hundreds of millions of acres of land and water under strict government control.

These abuses of the Antiquities Act give enormous power to faraway bureaucrats at the expense of the people who actually live here, work here, and make this place their home. This is where they raise their children. This is the place they love.

For example, the previous administration designated more than a half a billion acres of land and water, including Bears Ears. It did so over the loud objections of the people of this state and their elected representatives. Governor — right?

results have been very sad and very predictable. Here, and in other affected states, we have seen harmful and unnecessary restrictions on hunting, ranching, and responsible economic development. We have seen grazing restrictions prevent ranching families from passing their businesses and beloved heritage on to the children — the children that they love.

We’ve seen many rural families stopped from enjoying their outdoor activities. And the fact they’ve done it all their lives made no difference to the bureaucrats in Washington.

We have seen needed improvements, like infrastructure upgrades and road maintenance, impeded and foreclosed. We have seen how this tragic federal overreach prevents many Native Americans from having their rightful voice over the sacred land where they practice their most important ancestral and religious traditions.

Our precious national treasures must be protected. And they, from now on, will be protected. Under my administration, we will advance that protection through a truly representative process, one that listens to the local communities that knows the land the best and that cherishes the land the most.

With the action I’m taking today, we will not only give back your voice over the use of this land, we will also restore your access and your enjoyment. Public lands will once again be for public use — because we know that people who are free to use their land and enjoy their land are the people most determined to conserve their land.

With your help in treating our natural bounty with respect, gratitude, and love, we will put our nation’s treasures to great and wonderful use. Families will hike and hunt on land they have known for generations, and they will preserve it for generations to come. Cattle will graze along the open range. Sweeping landscapes will inspire young Americans to dream beyond the horizon. And the world will stand in awe of the artistry God has worked right here in your great state.

Together, we will usher in a bright new future of wonder and wealth, liberty and law, and patriotism and pride all across this great land.

And in your honor, I will now, with your representatives, sign this very, very important proclamation. Thank you very much, everyone. Thank you.